In case you were wondering whether the earth swallowed me last fall due to the radio silence on the blog, it kind of did: I spent much of September and October on the train crossing Russia, Mongolia and China. (See, I do get away from beach destinations sometimes!)

I had been planning on riding the Trans-Siberian railroad for years, as I’m a big fan of long train journeys. Yet for some reason I never got around to it before 2012. But it’s good that I didn’t – now I was able do the trip with my dad, who retired from the Finnish army a couple of years ago at the age of 50, and thus is a young senior citizen with plenty of free time. What better place to head for a family trip than Siberia!?

So after I spent a fun summer in Finland, my dad and I set off for the 3.5-week train journey into dark Siberia (which, funnily enough, ended up being bright and sunny the whole time). And just FYI: Most of this time was spent seeing sights and visiting towns along the way, not just sitting on the train. The actual travel time from Helsinki to Beijing was about a week.

After successfully completing the famous ride, I wrote an article for the Finnish newspaper Helsingin Sanomat, comparing the Trans-Siberian with another long train trip I’ve got under my belt, the Indian Pacific of Australia. (And yes, I know that by veering off to Mongolia after Ulan-Ude we actually took the Trans-Mongolian route for half of the trip, but for the purposes of the article, I focused on the Trans-Siberian part of the journey.)

The article turned out to be quite popular based on the feedback I heard, so I thought I’d do an English translation of it for you. So here we go:

Which marathon train trip suits you better, the tundra-crossing Trans-Siberian or the Indian Pacific zooming by the desert? HS put the trips to the test. 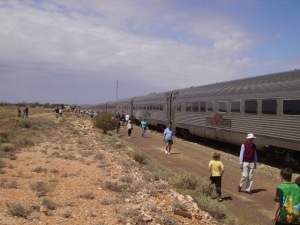 The Trans-Siberian railway from Moscow to Vladivostok is 9, 259 kilometers long. The trip takes about 150 hours, or more than six days.

History: Building a railroad crossing Russia took 25 years. The constructions were completed in 1904, and involved 90 000 people. The majority were inmates and soldiers sentenced into manual labor.

The main attractions: The city of Nizhny Novgorod that was closed off from foreigners during the Soviet era, where the Volga River can be crossed with a cable car, the Perm region with its 10,000-year-old permafrost ice caves, the world’s deepest lake Baikal, Irkutsk with its wooden mansions and the Buryatian Republic‘s capital city Ulan-Ude.

The atmosphere: The train rattles steadily along the tracks. The tobacco smoke floating into the carriage adds to the sleepy atmosphere. A young man pours hot water into his ready-made mashed potatoes, a grandpa takes secret sips from his spiced-up Sprite bottle in between card games. In roadside towns, older grannies with headscarves sell greasy pelmenis. The nights go by while listening to the snores of your carriage mates, and wondering what the sudden stops are all about.

Travel companions: Despite the Trans-Siberian’s great international popularity, the majority of the passengers are Russians: retired couples, families returning from visiting relatives, army boys and sports teams on trips. Every now and then you can hear some conversations in the Buryat language, spoken by the Buryat people who are descendants of Mongolians. Of the foreigners, most are Chinese and European.

Price: For the 54-bed open carriage (platskarny), a one-way ticket costs about 200 euros. First and second class four-person cabins cost 400-1,000 euro per person, depending on the train. Tickets can be bought either in Finland or for slightly cheaper in the Russian railway stations.

Facilities: The first-class cabins have showers, other passengers have to make do with shared toilets. The dining car’s golden décor reminds you of the grandeur of days gone by with its silk table cloths and curtains. Beer and vodka flow freely, and chatter is accompanied by borscht soup.

Please note: The term “Trans-Siberian” refers to the train track crossing Russia, not to any particular “Trans-Siberian train.” Rossija and Baikal are some of the better-quality trains that serve the route, as well as the new British luxury train Golden Eagle Trans-Siberian Express. There are also local trains traveling between different Siberian towns. One option is to get off the train in the morning in a town of your choosing and to continue the journey in the evening with another train. In doing so, the tickets need to be bought separately for each leg of the journey. Pay attention to the departure times: Russian railways always operate in Moscow-time, no matter what the local time in your Siberian destination may be.

The Indian-Pacific travels from Sydney to Perth. The 4 352-kilometer train journey takes 65 hours, or three days.

History: The railroad that crosses Australia, connecting the Pacific and Indian Oceans, was opened in 1970. It includes the world’s longest straight piece of track, the 478-kilometer Nullarbor Plain.

The main attractions: Australia’s oldest mining town Broken Hill, the city of 700 churches known as Adelaide, Kalgoorlie with 100 years’ worth of gold fever history, Nullarbor Plain, the ghost village of Cook with its four residents and millions of flies, the beaches of Perth.

Atmosphere: The 700-meter row of metal wagons rummages through the desert, past the occasional kangaroo, emu, herds of camels and two-meter wedge-tailed eagles. Happy chatter fills the restaurant car as the chicken curry dishes are scarfed down from the tables seating four people. The atmosphere is communal. The vast emptiness behind the windows is highlighted as the radio blasts bits of Slim Dusty’s perky song every couple of hours: “The Indian Pacific spans the land!” One can’t help but join in on the tune. A train trip doesn’t get more Australian than this.

Price: In the Gold Kangaroo section, a one-way trip in a luxury cabin with full board costs about 1,760 euro and in the Red Kangaroo section the same goes for 1,200 euros. Occasionally there will be platinum-level suites with a double bed on offer, costing 5,000 per person. Budget travelers have to settle for a reclining seat, best accessed by accruing a Rail Explorer pass. For about 360 euro you can ride Australian trains for three months.

Facilities: The Gold Kangaroo cabins feature bunk beds, combined toilet-shower stalls and large windows, and some come with a TV and minibar. Once the train has left the station, the Rail Explorer pass holders have the opportunity to purchase a Red Kangaroo cabin for 120 euro, provided there is enough room. Different travel classes have their own restaurant and lounge cars.

Please note: The stopovers are a few hours long. Guided city tours are sold for about 20 euro. 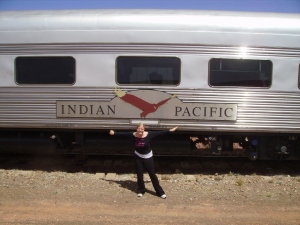 So that’s it! Have any of you taken the Trans-Siberian and/or the Indian Pacific? Any thoughts on which one is the best marathon train journey? 🙂