This post is part of the Ultimate Flight Marathon multi-part series, where I review the flights I took during 3.5 weeks of intense traveling in the late spring of 2016. 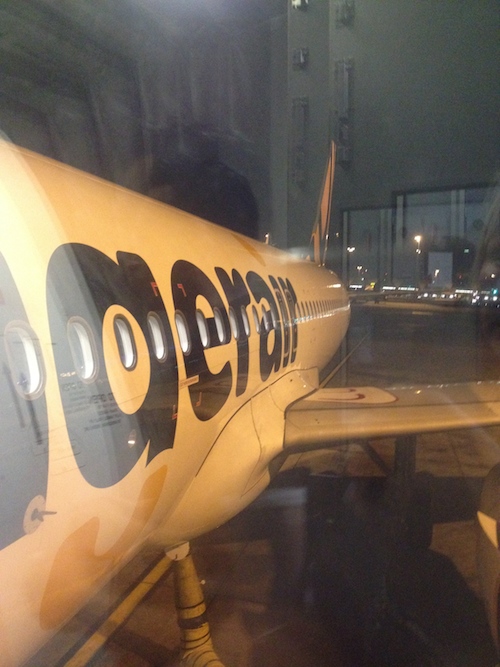 General info: Tiger Airways, operating as Tigerair, is a no-frills airline and a subsidiary of Singapore Airlines. It operates flights to 40 destinations across Asia. Our flight was an evening flight from Bangkok’s Suvarnabhumi airport to Singapore’s Changi, a.k.a. the best airport in the world. Above other things, Changi has some fish ponds, three movie theaters, a sunflower garden and even a butterfly garden (that we sadly didn’t get to visit).

What was special about this plane: It was your standard Airbus A320, but the layout was a bit different than what legacy carriers have. There were 180 economy seats instead of the usual 150, and no business class at all. The plane was new and clean, with comfy blue leather seats.

Highlight: There were a couple of Buddhist monks boarding the flight with us! I was surprised to see them flying, as I thought monks had to live a more modest earthly existence… then again, flying with low-fares airlines is pretty much the most modest way to travel nowadays anyway, as it’s often even cheaper than taking the bus.

What I would do differently next time: Tigerair doesn’t provide any entertainment on board – not even big shared screens. So I would make sure that my laptop battery was well charged instead of practically empty…

Food served: None was given for free (not even water), as is typical 0f no-frills carriers. Luckily we were not hungry at all, as we had just visited the Louis’ Tavern CIP First Class Lounge at Bangkok airport’s Concourse A that served pasta, puff pastries and cookies.

Thanks for yet another lounge visit, Priority Pass!

Turbulence: None. Yay! I’m not a fan…

Price: We bought a one-way ticket from Bangkok to Perth through the Tigerair website, which included a 12-hour layover in Singapore. The price of this entire ticket was around $180 per person so about $90 per flight. This whole ticket could have maybe been been cheaper since we had to pay $20 extra for checked-in luggage that we didn’t even have. For some reason Tigerair’s website didn’t allow me to book the flight without luggage – maybe because our second flight was with Scoot Airlines and not Tiger? Who knows…

Some parts of the Singapore airport are so pretty!

Miles earned: None, though I could have earned some Singapore Airlines’ KrisFlyer miles from this flight: Tigerair awards KrisFlyer miles to people who buy their Flexicombo fare. However, I didn’t think it was worth paying an extra 50 Singapore dollars (around $37) just so I could earn a measly 60 miles. Even if you get the Flexicombo fare and the miles, these Tigerair flights won’t count towards elite qualification. This means you can’t get silver or gold status with Singapore Airlines by flying one of these low-fares subsidiaries. As is mentioned in the terms and conditions, “Only KrisFlyer Elite miles earned on Singapore Airlines, SilkAir, Star Alliance partner airlines, Virgin Australia*, and Virgin Atlantic^ will count towards KrisFlyer Elite Silver and KrisFlyer Elite Gold membership.”