As you may have read from the last post, I spent more than three weeks in tiny Guinea-Bissau during my Great West African Tour of 2012 (four months, five countries, two occupied territories – surely the name of my trip is not much of an exaggeration?). 🙂

Besides liking Guinea-Bissau a whole lot, one of the reasons I stayed there for some extra time was that I was reporting on a new museum that is opening up soon. It’ll honor freedom fighter Amilcar Cabral, Africa’s “Che Guevara,” who fought for the independence of his home countries of Guinea-Bissau and Capo Verde in the 1970s. The museum is housed in Cabral’s childhood home in the town of Bafata, which was recently renovated by UNESCO.

I visited the museum and wrote the story for Passblue.com, a website that reports on issues related to the United Nations. The article can be read here and I’d love for all of you to check it out! After all, this piece was very challenging to complete, so please show it some looooove. ❤

Why was it so hard, you may ask… Well, mostly because I don’t speak Portuguese Creole, the official language of Guinea-Bissau. And people there don’t speak much English. So there was a bit of a communication barrier…

But one language I do speak fairly well is Spanish, and many Bissau-Guineans can also communicate in Portuguese. So rather than spending time (and money) looking for a translator, I decided to try to somehow manage on my own.

So I traveled to the town of Bafata, organized some interviews, went over to meet the people of UNESCO, called the governor of Bafata, and dug up some relatives of Cabral and thought everything would just be smooth sailing from there on…

And boy, was I wrong.

This was painfully evident during my interview with Amilcar Cabral’s niece, Iva Helena Gomes. I’d ask her a question in Spanish and then she’d give a great, long-winded answer in Portuguese (and/or Portuguese Creole), detailing the complex life story of her uncle… and I’d understand about 1/10 of each sentence, if even.

Every time the friendly lady spoke, it felt like a knife was being twisted in my stomach.

“This is the worst interview I’ve ever done, without a doubt,” I thought to myself as she went on in a language that might as well have been Chinese. I was totally lost, no matter how much I tried to search for familiar words. I have never left less in control of an interview.

In the end I had scribbled down just a few words out of the entire 30-minute interview. It was a sad, sad day. I left Gomes’ house without any spring in my step. Only a bit of panic in my heart. (“How can I write this story without any good quotes??”)

My interview with Bafata Governor Adriano Gomes Ferreira was also not the greatest of all times. Despite knowing Spanish, he would occasionally shift to Portuguese without even realizing it. 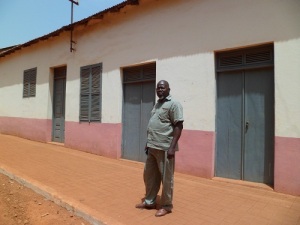 It was only during a lunch meeting in the governor’s house that the conversation got a bit easier. I think at that point the guv and his wife finally realized the limits of my Portuguese… Well, better late than never. 🙂

Luckily my other interviews went better, as they were conducted in proper Spanish and one even in English. So at least I learned I feel comfortable reporting in Spanish, but that I already knew from last year when I covered an HIV march in Guatemala City.

In the end the Cabral article turned out fine and I managed to work around my limited quotes. The editor of Passblue.com, Dulcie Leimbach, certainly seemed to like the outcome based on her email.

“I’m impressed you could use your Spanish so well in a Portuguese country. You deserve a Pulitzer!”

Well, thanks Dulcie but I’d hold off on the Pulitzer Prize for now. 😉

And while I did okay, I can’t help but wonder how nice would it have been to be able to choose from 20 great quotes instead of using the only two I understood?

So note to self: Next time I am in a Portuguese-speaking country, I should definitely hire a translator! Spanish is not the same as Portuguese. 😛