Today it has been exactly a year since Super Storm Sandy ravished the lives of New Yorkers and many others on the Eastern Seaboard. My Facebook feed has been full of commemorative status updates and links. I checked out a few of the articles and photos, including this story of a man who lost his life partner and every photo of him in the storm. Heartbreaking.

I was lucky last year in that my part of Brooklyn wasn’t really affected by the storm. Instead, I experienced Sandy from a different standpoint – I was covering it for Finnish media. The stories I wrote were published in Helsingin Sanomat, Finland’s biggest newspaper for whom I’ve written a number of travel stories, such as this one about the Trans-Siberian vs. The Indian Pacific.

The first call from the newspaper came on Monday morning, and the storm was due to hit that night. The paper had already found a photographer for me to work with, and they said they’d need a story about how New Yorkers were preparing for Sandy. And they would need it in about three hours. On top of that, they wanted me to find some Finns to interview, if possible.

Not going to happen, I thought – what are the odds I would find Finnish people wandering the streets of downtown on such short notice? The times I run into Finns in New York are few and far between anyway.

But the universe was on our side: as soon as photographer Kaisa Rautaheimo and I arrived downtown in our prospective cabs, we bumped into a Finnish couple! It truly felt like a small miracle. The couple, consisting of a Finnair pilot and his common-law wife, agreed to be interviewed. We got some great quotes from them about how they were stranded in New York as the airport was closed.

“Overall the feeling is peaceful, there’s no panic,” they said at the time. “We’re taking this as an adventure.”

We also found a number of other New Yorkers willing to give us a quick quote, and I rushed home to type up the story. Mission accomplished! For the rest of the night I huddled in a friend’s apartment, anxiously waiting for the storm of the century. The next day the newspaper in Finland ran three different versions of my story in their various print editions. 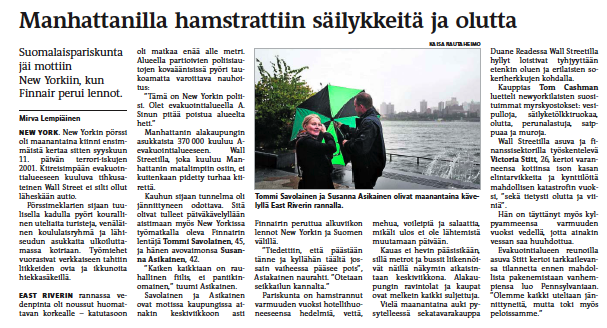 Tuesday morning I woke up to another call from Helsingin Sanomat. They updated me on what the storm had done while I had been asleep – hundreds of thousands of people were without power in Manhattan, the bridges were closed. They asked me to go out to find three people affected by the storm and to interview them for a post-storm article. Again, they needed the story in 3-4 hours.

The morning was super chaotic as I was trying to figure out if there was a way for me to get to Manhattan to do the interviews. If the bridges were closed, there was no public transport and the cabs were all taken, what could I do? Magically a friend just happened to be driving into Manhattan, and had heard rumors about Brooklyn Bridge being open to private vehicles. It was and I got a ride – phew.

I met up with Kaisa at Times Square and we spent the next few hours taking cabs around Manhattan in search of people to interview. On 14th street and 8th Avenue we saw a crowd had gathered around an apartment whose front wall had fallen down. Very few restaurants were open, and the lines were long. Finally we interviewed a woman who had huddled all night in her dark apartment downtown, a man who had ridden his bicycle from Brooklyn to Manhattan to see the damage and a Lower East Side family whose whole building had lost power.

As Kaisa also didn’t have electricity in her downtown apartment, we rushed back to Brooklyn to get online to send our stories and photos to the paper. We called the editor as we were on our way back. I started writing the article in the cab but had to change it midway after getting more instructions from the editor. Yikes.

I remember sitting down at the desk to write and looking at the clock: the story is due in 45 minutes! The pressure was building but I knew I couldn’t let that get to me. Whenever I got too self-critical, I remembered the advice of Anthony Mancini, my features professor at the CUNY Graduate School of Journalism: “Don’t let the perfect be the enemy of the good.” So I just typed as fast as I could and told the stories exactly how they had been told to me. And phew, I finished the article right on deadline. That story, too, made the front page of the foreign section the next day.

It was only at that point, almost 20 hours after Sandy had hit, that I actually had time to start learning about what had happened. I felt fortunate that I had gotten away with hearing a few howling winds outside my window and seeing a few overturned trees.

And I felt really lucky I had been around to deliver the stories to Helsingin Sanomat. It was my first real foray into breaking news reporting and was great practice for what was to come about a month later – the Connecticut elementary school shootings. I covered that for another Finnish paper, Iltalehti. That to this day remains the hardest reporting assignment I have ever done for multiple reasons.I’m sure it would have been even more challenging, had I not had the Sandy experience fresh in my mind.

As terrible as the storm was for many people, it taught me that reporting breaking news is not as scary as I had imagined, and it’s something I actually enjoy. The feeling of having finished an article right before deadline is an endorphin high like no other.  And it felt great to be writing about something that actually mattered, rather than doing yet another hotel review (as fun as those are). By all account, Sandy was a big deal, and I’m happy to have written up a tiny piece of history.

Were you affected by Sandy in some shape or form?