While many of you were freezing in the Northern Hemisphere this winter and dreaming of tropical places like Central America, my friend Mira and I were dreaming in Central America. Well, at least Mira was. I was busy snapping photos of her taking naps in random locations around Costa Rica, Nicaragua, El Salvador and Honduras over our three-month trip. And wow, this girl sure can sleep! She is hands down the most relaxed travel buddy I’ve ever had. 🙂

So if you are looking for inspiration for your next relaxing holiday, take a look at this video. You just might see a destination or two where you’d like to take a snooze yourself.

Have you ever gone on vacation where you spent a lot of time sleeping? What’s your favorite place to take a nap?

A few months ago I realized something very profound about myself. It happened as I was swimming at a deserted paradise beach in the village of Diembering, in the Casamance region of Senegal. Jumping over big waves and body-surfing on top of the blue water, I was feeling overly happy – like a kid on a sugar high.

That’s when I realized that I have a problem – a beach problem. In fact, it’s a real addiction. 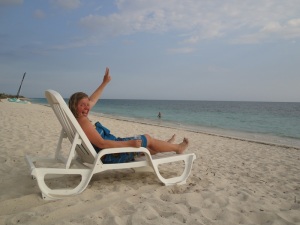 Since 1999, only one year has passed without me spending weeks or months in the vicinity of amazingly beautiful tropical beaches. That year was 2005, when the shore line of New York (which is actually not too shabby!) had to suffice.

But in 2006 I more than made up for the lost beach time by spending eight months in Australia, the country of pristine waters and white sands and mind-boggling snorkeling opportunities. My favorite memory from that year is swimming alongside a giant turtle at Lady Musgrave Island. 🙂

Since those sunny days Down Under I’ve also discovered playas in Latin America (Colombia! Cuba! Panama!), South and South East Asia, the Caribbean and most recently West Africa. In fact, looking at my travel routes over the years, my paths have almost always followed the coast lines of continents. Coincidence? I think not. 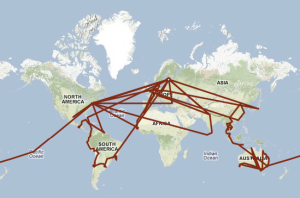 So yeah, I like beaches. A lot. But so do many other people. Why would that be a problem, you may ask…?

Well, not that it’s a problem per se, but my love of beach bumming has definitely had a profound impact on who I am, my career choices and the type of life I lead nowadays. Sometimes I have to wonder what kind of a person I’d be, had I never been enchanted by gently-swaying palm trees and the refreshing taste of fresh coconut water – to the point that being near them is almost an unhealthy obsession. You wouldn’t believe the arrangements and compromises I’ve made in order to stay near the ocean swells. 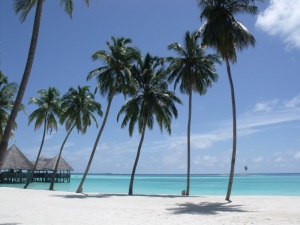 You see, it was the proximity to Pacific and Atlantic beaches that prompted me to pursue journalism studies in California and Florida, and even got me considering Hawaii for my master’s degree. Eventually New York won, but only barely.

Yes, my addiction is that bad! The thought of living inland has always felt suffocating. Even my occasional inland travels, such as the February yoga retreat in the Sahara, make me feel a bit uneasy. Generally a week is the max I can spend away from the coast without getting jittery.

So in early 2000s I studied for two years at Palomar College near the famous surfer city of San Diego, California. I then transferred schools and two years later got my bachelor’s degree from Flagler College in the tiny coastal town of St. Augustine, Florida. Since Flagler didn’t offer a degree in journalism, I had to settle for studying communication. But at least I was able to spend my days off rollerblading to the beautiful nearby beach! Now that would not have been possible at the Missouri School of Journalism, probably the most famous J-school in the US.

So basically I had to make the choice between a quality education and a quality beach – and I chose the latter. Was it the smartest thing to do career-wise? Maybe not, though the classes at Flagler were definitely good too and I learned a lot. Did I love my life in California and Florida to the fullest? You bet.

And I won’t lie – it was the images of eye-achingly white stretches of sand and unreal turquoise waters that got me thinking that the Maldives would be an amazing place to teach journalism in 2010 with the help of the Davis Projects for Peace grant. That, and the fact that the country had just gotten freedom of speech in 2008 and the residents were in dire need of media education. Lucky me, my proposal got selected for the grant as one of 11 out of 50 applications.

So for two months I taught workshops in this tropical island nation together with my super talented photographer-videographer friend Mariana Keller. The experience was truly unique: I loved being able to share my knowledge with the local journalists and to train them in our common craft. But yet somehow what I remember the best from those months is the amazing scenery that words cannot describe:

It may come as no surprise that it was this trip to the Maldives that solidified my decision to continue on the freelancing path. Sure, it may not be the best paid job out there or one that is for the faint of heart due to its irregularity. But then what other job would allow me adequate beach time whenever I felt a pressing need to hug a palm tree? If you hear of one, please let me know. Until then, you’ll likely find me typing away on some tropical beach.

So who else wants to confess to being a full-blown beachoholic?? (Yes! There’s even a song for us!) What kinds of sacrifices have you made in your life in order to keep your feet in the sand as often as possible?