As I promised, here starts my review series of the flights that make up the Ultimate Flight Marathon (i.e. my personal Amazing Race).

Duration of the flight: 1.5 hours

Delays: We did leave about 10 minutes behind schedule, but it didn’t impact our arrival time. However, it was a bit nerve-wracking that boarding only started after we were supposed to have taken off already (as I knew I had a tight connection in San Juan).

General info: Seaborne is a tiny Caribbean airline that partners with American Airlines and Jet Blue. Therefore your e-ticket may say American Airlines (as mine did) but rest assured – your aircraft will be much more exotic than “plane” ol’ American (pun intended). On the route from Guadeloupe to Puerto Rico, Seaborne operates a tiny 30-seater twin-engine propeller plane, Saab 340 TurboProp. It’s definitely not the most modern aircraft out there – Wikipedia tells me that the production of this plane type ended in 1998.

What was special about this plane: The overhead bins are so small that a regular carry-on suitcase won’t fit up there. Therefore the staff collected bigger carry-ons from people as they were stepping up to the aircraft, and stashed them in the plane’s luggage compartment. Folks got them back as soon as we landed in San Juan. Luckily my backpack was small enough to fit in the tiny space we were allotted. (Yay for packing light!)

Highlight: It was entertaining to watch the lone flight attendant, Julio, trying to play several roles simultaneously and to try not to hit his head onto the low roof.

What I would do differently next time: The whole left side of the plane is made up of single seats, so everyone got a window seat – except for me! I managed to be assigned the only window seat onboard that didn’t have a window. Lame. So next time I’ll ask for a seat that is not 2A. I had to gawk over at my neigh 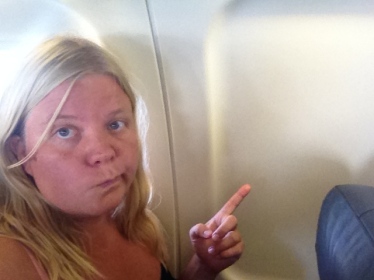 bor’s window to steal at least a small glimpse of the pretty islands of the Caribbean we flew over.

Food served: We got two bags of pretzels and a choice of mango/guava juice and water. Not shabby for such a short hop across the pond!

Turbulence: In smaller planes you tend to feel every twist and turn. From that perspective the ride was exceptionally smooth. There was practically no shaking at all – just a tad at the landing time.

Price: This was the first flight of the two flights that made up my one-way ticket from Guadeloupe to NYC. The total price of this ticket would have been $220, but I paid it with the awesome Thank You points from Citibank. As long as you have the Citi Prestige credit card, these points offer great value if you are booking an American Airlines flight or a codeshare (which is what this one was). Yet another reason to love that card (getting access to airport lounges is another!). Of course I would have much rather taken one of the cheap and direct Norwegian Air flights from Gwada to NYC, but unfortunately those flights aren’t running again until November.

Miles earned: Not a whole lot – I earned just 331 miles, which I deposited into the American Airlines AAdvantage program.