This year Feb. 20 and 21 are the official Catholic carnival dates. So the party is on in the ultimate carnival nation, Trinidad & Tobago! I can almost hear the music blaring from the loudspeakers of the trucks and see the Trinis shaking their hips in unison. The year’s most-awaited fiesta is finally here!

But of course the emphasis here is on the word almost, as I’m nowhere near the Caribbean at the moment.

Instead I’m sitting in the peace and quiet of Dakhla, an isolated town in Western Sahara. There’s no music to be heard, and not a single dance club in town. Instead there are countless cafes serving only non-alcoholic drinks and a nice ocean breeze blowing over to the beach boulevard from the turquoise bay. Whereas in T&T hoardes of women are currently prancing around in skimpy bikinis, here the ladies are covered head to toe with colorful fabrics.

But this stark contrast shouldn’t stop me from reminiscing about last year’s carnival, and telling you about it! After all, T&T’s carnival is something everyone should experience at least once in their lifetime.

So to get you into proper carnival spirit, let’s take a look at how I described the Trinidad & Tobago carnival last year in my old blog a week after the party: 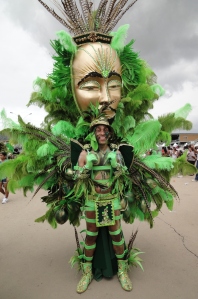 Now that carnival and all the craziness is officially over, it’s time to look back and figure out what exactly happened during that whole week of non-stop action.

If there’s one thing I’ve learned, it’s that nobody takes carnival as seriously as the people of Trinidad. It’s been said that Trinis are either celebrating carnival, talking about the last carnival or planning the next carnival. I don’t have any doubt about that being true. After all, I met a person who had spent US$2,000 on their carnival costume and party tickets, and another one who had spent US$1,200 on flight tickets to be able to fly to Trinidad for a day and then fly back to the US for work the next day. I also witnessed some 80,000 people taking part in the carnival processions. 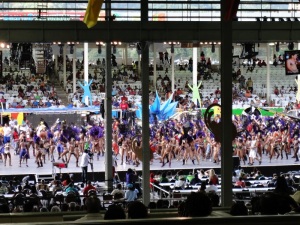 Whereas in Rio de Janeiro most people watch the carnival show from the comfort of their Sambodromo seat, in Trinidad they say 80 percent of the people actually take part in the show, and only 20 percent watch it. “Are you playing mas?” was the most popular question of the week, as was “Which band are you playing with?”. It took me a while to figure out that playing mas with a band had nothing to do with playing any kind of an instrument with a live orchestra. “Mas” refers to masquerading, and “band” refers to a set of trucks that have huge loudspeakers on them blasting music as they roam the streets. Some of the popular bands include Tribe, Yuma and Island People. Apparently there are slight differences in the types of party people each band attracts, but costume- and music-wise they all seemed very alike. The same Soca hits, the same colorful feather outfits and the same drinks (anything with Red Bull being the favorite). But people still seemed very patriotic towards their own group, which for my friends was Yuma. 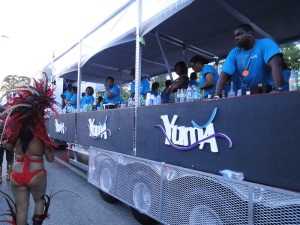 Those that choose to play mas will thus don their skimpy outfits and dance next to a particular band (group of trucks) on Tuesday, the official carnival day. The highlight of the day is “crossing the stage” with your group, the official carnival stadium in the center of Port of Spain that was built a couple of years ago. One of this year’s biggest Soca hits, Machel Montano’s Advantage, talks specifically about the excitement of crossing the stage: “The stage is in front of us, time to take advantage of it!”.

The previous day, Monday, is a “training day” of sorts when people wear their band’s signature T-shirt and shorts and follow the trucks for miles on end. 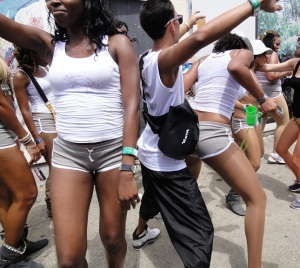 Much to the surprise of many, I had decided not to play mas. “Why would you come to Trinidad and not play mas? That’s the best part of carnival!”, people asked me. My answers varied from “I don’t feel like squeezing into a skimpy costume” to “I don’t have the energy to walk 20 miles after a truck” and to “I’d rather watch you guys from the audience.” The truth is that I just couldn’t justify spending $500 to “play mas” (nor did I have an extra $500 lying around anywhere!). Yes, you read right – five hundred United States dollars! That’s how much the tickets were for the two official carnival days, if you wanted to play with a band. The price included free drinks for the two days (from a moving truck that doubled as a bar), the band’s t-shirt and shorts, your skimpy carnival costume for Tuesday’s show, and a boxed lunch both days (a simple chicken and rice meal, served cold and often hours late).

Call me a cheapskate, but that to me sounds like a rip-off. Someone is making big bucks off the Trinis’ love for their biggest national holiday. A more reasonable price would have been $250, and even that would have still been way more than what I’ve ever paid for an all-inclusive party in New York. Granted, someone had to pay for the trucks and the security people, but the price still seems pretty steep to me. However, most Trinis seemed to think that paying $500 for two days of partying was a decent deal (never mind that $500 is the average monthly income in Trinidad, when all social classes are taken into account). And the remaining people must have thought that even though it isn’t an amazing deal, so what? It’s carnival! Time to splurge and engage in revelry! Take the skin off my back and sell my grandma’s house if it guarantees a good carnival!

If you still don’t believe that the Trinis’ devotion to carnival even beats that of Brazilians, check out this popular blog called Trinidad Carnival Diary by a woman who writes about carnival – 365 days a year. So yes, I missed out on the experience of playing mas (but I saved $500!). And I did sneak into the band my friends played with on Monday anyway, and walked and danced along with their trucks for miles just as they did. Then on Tuesday, when everyone was in their full costumes and thus blending into the group in regular clothes would have been harder, I watched the show from the Savannah stadium. Even this would have cost $80, but luckily I have friends in high places so I got in for free. 😉

Personally I think I got the best deal, and I didn’t mind missing out on crossing the stage on Tuesday. Quite the contrary, I was happy I didn’t have to get up at 5 a.m. to put on my make-up and costume, and then walk for 20 miles in the heat and try to keep up my party spirit until 10 p.m.! And this was after at least four days of partying, as the two official carnival days are preceded by a week of celebrations.

While it seems like every self-respecting Trini needs to play mas at least once in their lifetime (or preferably every year), I would recommend visitors to skip out on paying the $500 and just dancing next to the bands for free when you feel like it. The rest of the time you can pop into some of the bars along the parade route or make your way near the Savannah to see the groups preparing to go on stage. And anyway, as is the case with the full moon party in Thailand, the best parties are actually those that happen before the official celebrations. In Trinidad, one of the biggest fiestas is the J’Ouvert morning party. At 4 a.m. on Monday morning, thousands of people gather on the streets and cover each other with cocoa powder and paint and colorful powder. The end-result is a sticky mess, but it’s all good fun.

My personal favorite was the Veil breakfast party, which started at 4 a.m. on Sunday morning and went on until noon the next day (yes, the Trinis do party 24/7 during carnival!).
Not many parties are more fun than those where you dance outdoors to the beats of great Soca songs, and watch the sun rise out of the horizon. Finally at noon, sunburned and all partied-out, you get home and just crash. It’s then that you know that you’ve really made the most out of your carnival, like a true Trini. 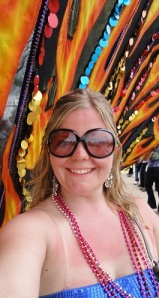